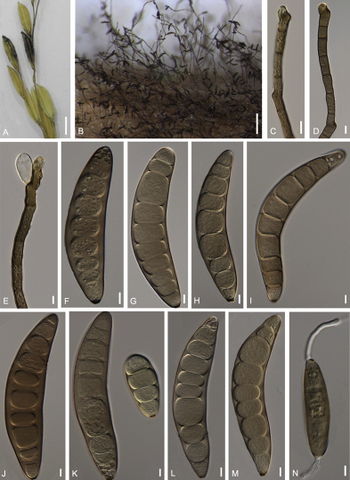 The fungus is the infectious agent of brown spot of rice, a serious and economically important disease. It occurs in most rice growing areas and can cause epidemics. The pathogen has been attributed to the Bengal famine of 1943. It is often associated with drought conditions. Other grasses and monocots can also become infected.

The disease can kill rice seedlings (blight of seedlings) or affect older plants. In the latter case, it causes oval lesions, up to 1 cm long, that have a light brown or gray center surrounded by a thick brown margin and a halo. Yield is reduced. Seeds are often spotted, might fail to germinate and have a lower milling quality. Control mainly involves the use of resistant cultivars and fungicides. The application of silicon (e.g. potassium silicate as part of a fertilizer mix) has also given promising results.

Dispersal of the fungus can occur through the seeds or through the air via the conidia. The conidia are brown, straight, curved or club-shaped, with about 5-10 septa and a typical size of 50-100 x 10-15 µm.