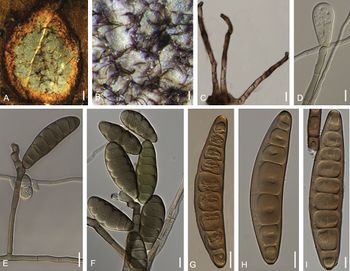 This fungus is widely distributed in tropical regions. It infects rubber trees (Hevea brasiliensis), but has been also reported from grasses. On rubber, it causes circular leaf spots, bordered by a purplish brown line. The conidia are curved and brown with a size of around 90 x 20 µm. See Manamgoda et al. (2014) for details.