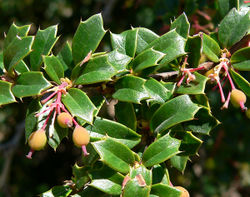 This species of barberry is an evergreen shrub, native to South America. It is planted as an ornamental shrub and has become an aggressive and invasive weed in several countries like New Zealand and Australia.