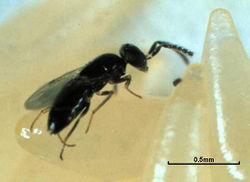 This egg parasitoid has been successfully introduced in the 1990s from Australia into California against the eucalyptus longhorned borer, Phoracantha semipunctata. The beetles populations were significantly reduced following the introduction. A related longhorned beetle, Phoracantha recurva, also accidentally introduced into California (first record 1995), is also parasitized, but to a much lower degree. The parasitoid is often encapsulated and killed in the eggs of P. recurva (McDonald et al., 2015).