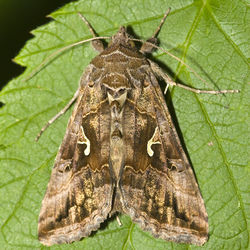 This genus of nuctuid moths contains around 40 species that are found in temperate parts of Europe, Asia and North America. Several species are regarded as agricultural pests. E.g. the silver Y-moth, Autographa gamma, is highly polyphagous and attacks various crops in Europe and Asia. It migrates in the spring from the Mediterranean region to central Europe.

The adult moths of the genus Autographa are brownish or greyish with darker and lighter marks. In many species there is a white mark in the middle of the forewing, often in the form of a "y". The caterpillars are semi-loopers and typically greenish.