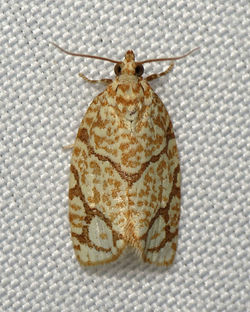 This leafroller moth is found in eastern parts of North America, where the larvae feed on the leaves of oak and some other trees. The adults have a wingspan of around 20 mm. The hindwings are light brown with a net-like pattern of dark brown.