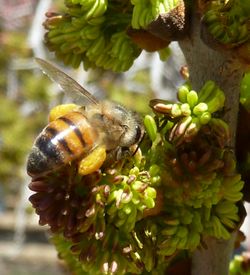 The honey bee is one of the most important pollinators of crops and a valuable producer of honey. However, there are a few negative aspects of the honey bee. These include the Africanized honey bee, Apis mellifera scutellata which is very aggressive. For example, the race has been introduced into Brazil in 1956 in order to improve the honey production. While it was more adapted to the local climate it readily attacked humans. That race as well as hybrids with other Apis mellifera races subsequently spread to other parts of the Americas.

The subspecies Apis mellifera capensis can parasitize and destroy other honeybee colonies. In addition, Apis mellifera has been recorded as a pest of alders in Eastern Africa.

For details on the Africanized honey bee see the respective page in Wikipedia.