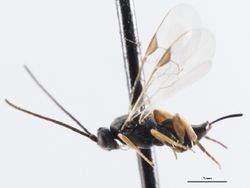 This wasp species is an endoparasitoid of early-instars of the spruce budworm (Choristoneura fumiferana) and other Choristoneura species in North America. It has been also reported from a number of other hosts. However, several new species have been described which were previously regarded as being A. fumiferanae (e.g. see Fernández-Triana, 2010).