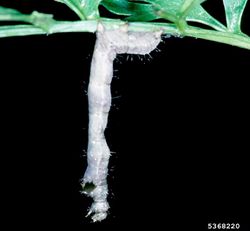 This genus contains insect viruses similar to the Autographa californica nucleopolyhedrovirus (AcMNPV) and includes most viruses previously classified under the genus Nucleopolyhedrovirus. The viruses infect exclusively the larval stages of Lepidoptera and a given virus is often specific for a small group of insect species. Many viruses are still tentatively placed in this genus, pending DNA analysis.

The virus enters the nucleus of the host insect, multiplies and by budding spreads within the insect. In a second stage it forms protein crystals (occlusion bodies) in the nucleus which enclose several virus particles. The nucleus becomes completely filled with these crystals which are released when the insect dies. They persist in the environment for some time and when taken up again by a host insect with the food, they dissolve in the alkaline gut juice and the infection cycle is repeated.

The genome of the viruses is composed of circular double-stranded DNA, 80-180 kb in length and encoding 100-180 different proteins. The DNA is arranged in a protein matrix, the capsid. One or several virus capsids are again enclosed in a protein envelope and the two types are referred to as single (SNPV) or multiple (MNPV) nucleopolyhedroviruses. The occlusion bodies contain several of these enveloped capsids.