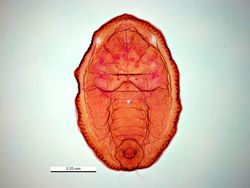 The genus contains around 80 species of whiteflies. Several species are agricultural pests like Aleurotrachelus socialis, a pest of cassava in northern parts of South America.

Species of Aleurotrachelus are characterised by the puparium having a submargin with a row of small, toothlike conical processes. For a key to the whitefly genera of southeastern North America, including Aleurotrachelus, see Hodges & Evans (2005).