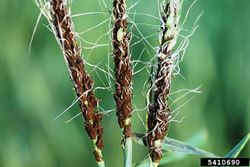 This fungus is widely distributed in wheat growing areas. It infects the ears of wheat during flowering and the developing grains produce masses of brown-black spores. Infested fields can no longer be used for seed production. In Europe, typically, a wheat field with an infestation of more than 5 ears per 100 m2 will be rejected for seed production. The mycelium remains viable for several years inside the grain. Apart from wheat, rye and triticale may also become infected.

Warm and humid conditions during flowering promote disease epidemics. The spores are airborne and spread by wind. They are spherical with a diameter of 5-9 µm and covered on the surface by small projections. Each spore has a darker and a lighter side.