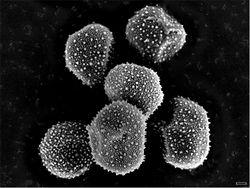 This order of smut fungi contains almost 1,000 species, including various important plant pathogens of cereals. They usually attack the inflorescences, leaves and stems of their host plants, rarely the roots. The hyphae are generally found between the cells. They form thick-walled resting spores in black or brown spore masses called sori which resemble soot or smut. The spores are teliospores and are called ustilospores or smut spores.

The teliospores germinate and form a branched basidium which produces haploid and saprobic sporidia. These are unicellular, yeast-like and colonize various plants but are not pathogenic. When compatible (+ and -) sporidia merge they form dikaryotic, multicellular hyphae which penetrate certain host plants and cause the smut diseases.

Note:
This page only deals with plant pathogens. For other groups of Ustilaginales in the system see: