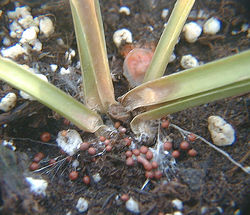 The taxonomy of this genus needs revision. The type species is Sclerotium complanatum for which no sexual stage is known. It is classified under the Agaricales by some authors who believe it may have a Typhula form as teleomorph. The genus Typhula has been proposed for protection over the genus Sclerotium (Stalpers et al., 2021).