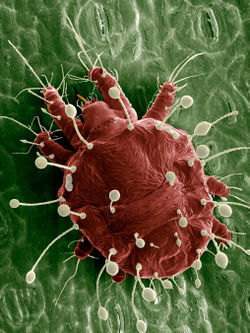 The mite is considered to be native in Africa and Asia and has spread to Central America (first record in 2004, see Etienne and Flechtmann, 2006). Subsequently spreading to South America (Vásquez et al., 2008) and to southern parts of North America (Cocco and Hoy, 2009). It is mainly a pest of coconut and other palms, causing yellowing and necrosis on the fronds, up to death of the leaflets. However, it also feeds on other plants (e.g. bananas). In some areas coconut yield has been halved due to infestations by the mite.

Like other mites, it can disperse through the air. The use of pesticides, e.g. as systemics, has been practised but is usually not economical on coconut and ornamental palms. Research has therefore focused on biological control, with emphasis on predatory mites like Amblyseius largoensis.

The adult is about 1/4th to 1/3rd of a mm long and red, sometimes with dark markings. The body bears long setae which form droplets near the end. The development from egg, through the larval, protonymph and deutonymph stages, to the adult lasts about 3-4 weeks.