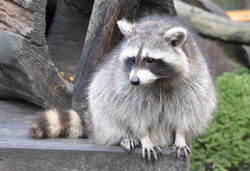 The raccoon is an omnivorous carnivore, native to North America. It feeds on plant material, vertebrates, invertebrates or rubbish and can be found in a variety of habitats like forests, farmland and urban areas. It has bee introduced into Europe since the 1930s both deliberately (pets being set free) and accidentally (e.g. escapes from fur farms). Management efforts are also ongoing against invasive populations in other regions, e.g. in Japan (Kotani et al., 2009).

The impact of the pest ranges from damage to garden plants, feeding on birds and reptiles, to carrying parasites and diseases like rabies. The raccoon has been identified as one of the top 10 invasive species in the U.K. A survey in Germany around 2000, came to the conclusion that there are about 1 million raccoons living in that country.