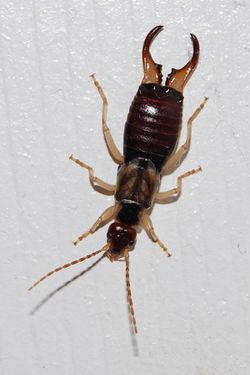 The species of this group are medium-sized, elongated and often omnivorous insects, typically 10-20 mm long. Although some species are known to damage crops like fruits and maize, they are usually considered to be beneficial, feeding on small insects and mites.

The adults have an elongated and flat body with short, scale-like forewings. The hindwings are semi-circular and folded underneath the forewings. However, they rarely fly and apterous forms are also common. The abdomen carries prominent, pincer-like cerci at the end. These are mainly used for hunting prey, folding the wings and for defence.

The following families are currently included in this group: