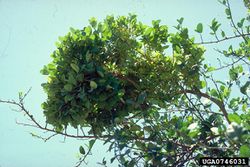 This phytoplasma species is widely distributed and has been reported to be associated with a large variety of host plants and symptoms. It has been assigned to subgroup B of the 16SrII phytoplasma group.