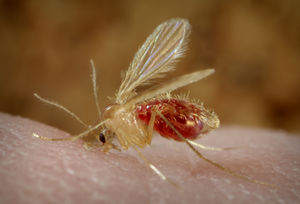 The species is found in the Mediterranean region, western Asia, as well as in northern and eastern Africa. It is the most important vector of zoonotic cutaneous leishmaniasis, caused by Leishmania major. This disease infects around 10 million people, with more than 1 million new infections per year. Sandfly fever viruses (phleboviruses) and Leishmania turanica can be also transmitted. The species is strongly anthropophilic and associated with human environments, animal shelters and rodent burrows. However, it feeds also on other mammals as well as on birds.

P. papatasi prefers humid conditions and is attracted to dwellings where it bites mainly during the night. During a study in several villages of Iran, the infection rate of P. papatasi females with L. major ranged from 7-22% and females had acquired their blood meals from sheep, cows, goats, humans, rodents and birds, in that order of frequency (Yaghoobi-Ershadi et al., 2005).

P. papatasi breeds in moist soil, rich in organic matter (e.g. soil around rodent burrows). It can be reared on animal feces. The development from egg, through 4 larval stages, to mature adult lasts around 3-4 weeks. The adults feed on plants and honeydew excreted by aphids. However, females require a blood meal before laying eggs. Management typically involves the insecticide treatment of resting sites (houses, animal shelters and rodent burrows).

The adult is 2-3 mm long and light brown. Body and wings are covered with hairs (scales). Males are characterized by the structure of their genital claspers.