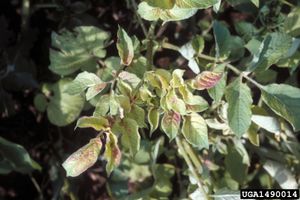 The bacterium is unculturable, phloem-limited and Gram-negative. It infects potatoes causing the zebra chip disease, as well as various other crops like tomatoes, carrots and celery. Several haplotypes of the bacterium are known (see below) which differ in their host range, vector species and geographical distribution. Potato and tomato plants show chlorosis, leaf curling, dieback and decline.

In potatoes, the disease reduces both yield and quality of the crops. Potato chips made from infected tubers show dark stripes after frying. This is caused by starch in the tubers being converted into sugar as part of the disease process. The sugar then causes black deposits (caramelize) during frying. Although consumption of these potatoes does not pose any health risks, the potatoes have an unusual taste and are no longer marketable. In New Zealand the disease causes economic losses on tomatoes.

The disease has been reported since the early 1990s in Central America and Mexico. It is found in the United States since 2000 and in New Zealand since 2008. Serious disease outbreaks have been reported from Texas, Colorado, Nebraska, and New Mexico between 2004 and 2007 and from Oregon, Washington, and Idaho in 2011. For management, insecticide sprays are used against the vector populations.