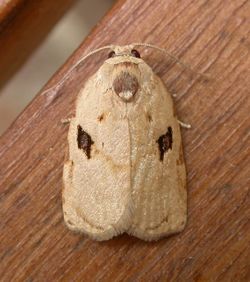 This genus contains around 40 species of tortrix moths that are found in tropical and subtropical parts of Asia and Africa. They feed on trees and bushes, tying or rolling the leaves together. They have a small to medium size with a typical wingspan of around 15-30 mm and a brownish colouration. Several species are regarded as crop pests like Homona magnanima which infests tea and other crops in eastern Asia.