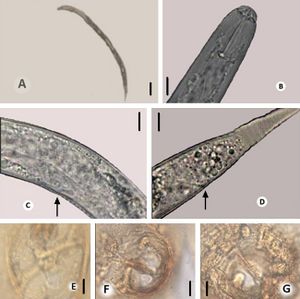 The species has a similar biology to Heterodera avenae and Heterodera filipjevi. All three species are part of the cereal cyst nematode complex. H. latipons is mainly found in the Mediterranean region and in Europe. The most important hosts are barley, oats, rye and wheat. Symptoms include yellowing, patchy growth in fields with poor tillering and short spikes. Yield losses of up to 50% have been reported from some countries.

Morphologically it can be distinguished from other cereal cyst nematodes by the morphology of the vulval area of the cysts. The semi-fenestrae in this area are well separated.