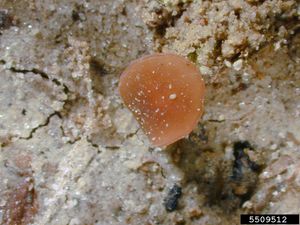 The Helotiales is a large group of ascomycete fungi with several thousand species. The group includes important plant pathogens like

In general, the fruiting bodies (apothecia) are cup-shaped or disc-shaped and often brightly coloured. The asci have slightly thickened apices and contain 8 ascospores. The group is mainly characterized by its DNA structure.

Note:
This page only deals with plant pathogenic Helotiales. For other groups see

The following genera and individual species are currently entered under Helotiales: