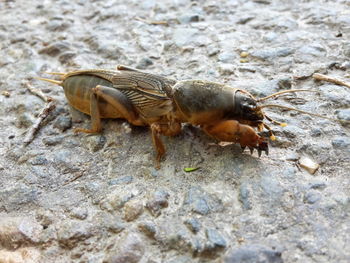 The European mole cricket is native to Europe and western Asia. It has been accidentally introduced into some areas of eastern North America. It is an occasional pest of crops like potatoes, vegetables and grasses, but considered endangered in other areas.

The adults are around 60-65 mm long and have a brown colour. Two forms can be distinguished according to their wing length, flightless short-winged (brachypterous) as well as long-winged forms.