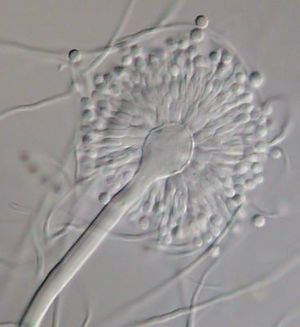 This order of ascomycetes contains around 1,000 species of saprophytic and plant pathogenic molds. Penicillium and Aspergillus are familiar members of this group. Sexual fruiting bodies (typically cleistothecia) are often rare. There are of variable size, from large forms like in truffels to microscopic structures. The cleistothecia are closed and contain round asci. The asexual conidia are typically spherical and are produced in chains. In the common molds, the conidiophore has a terminal, swollen "vesicle" from which the elongated, conidia-forming "phialides" originate, sometimes with a layer of intermediate cells.

The following genera are currently entered under Eurotiales: