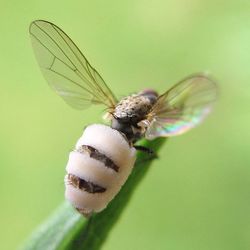 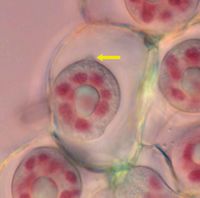 This fungus is widely distributed, mainly in temperate regions. It has been reported to infect a variety of different Diptera like fruit flies, house flies or root flies. However, some of these reports might refer to the complex of closely related species, called Entomophthora muscae s.l. The species of this complex are morphologically indistinguishable and include, for example, Entomophthora schizophorae or Entomophthora syrphii, a pathogen of hover flies. Each member of this complex appears to have a more restricted host range, with Entomophthora muscae s.str. being most virulent to the house fly, but can infect other Diptera at a lower rate. In house flies, the fungus causes higher mortality and forms larger conidia (Becher et al., 2018).

Like other species of Entomophthora, E. muscae changes the behaviour of the infected host and induces it to rest on top of a plant where the fly dies, typically with the wings spread out. The fungus then emerges through the soft intersegmental membranes of the abdomen, forming first primary conidia which are ejected from the host insect. The primary conidia might infect a new host or germinate and form secondary conidia which are also infectious.