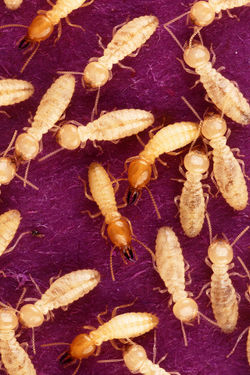 The termite is native to the warmer regions in Asia and has been recorded from North America since the 1960s, apparently originating from Taiwan or mainland China. It causes serious damage to wooden structures. In southern North American, the damage including control expenses approaches 2 billion US$ annually.

The underground nests are connected by an elaborate, ramified tunnel systems which can exceed 100 m in diameter. A colony might contain more than 1 million insects. It is composed of the queen, workers and soldiers (10-15% of the individuals). Workers and soldiers are about 4-5 mm long. The foraging activities of a colony covers several hundred square meters (Ruan et al., 2015). Alates (about 12 to 15 mm long) are produced periodically and typically disperse less than 1 km.

Control can be difficult, due to the size of the colonies. It is predominantly done by slow-acting toxic baits and soil treatments with liquid insecticides. Wood product can be also protected by suitable chemicals. In addition, quarantine efforts are important to prevent the further spread of the termite.