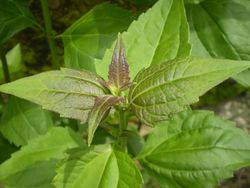 The plant is native to America from the southern U.S. to northern Argentina and has become a serious introduced weed in tropical and subtropical regions of Africa and Asia. It apparently was first introduced into the Botanic Garden of Calcutta in 1845 from where it spread through the region. In 1994, it was recorded from northern Australia.

It spreads mainly by seeds and invades various agricultural crops and other habitats, forming dense monocultures. The plants easily resprout after cutting or burning.