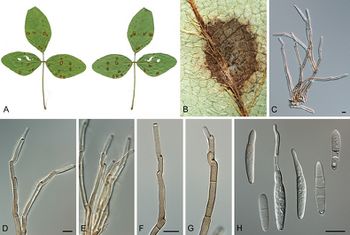 The fungi of this genus include plant pathogens causing leaf spot and other diseases on a variety of crops. In some species, the leaf spots are described as "frogeye leaf spot" with a dark ring on the outside and the centre drying up and eventually falling out, leaving a hole in the leaf. Some species are saprobes.

The original description of the genus was based on the structure of conidiomata as well as conidial pigmentation, septation, wall thickness, length, width, and shape. This resulted in a very large and heterogenous group of species. For the current definition and taxonomic reviews of the genus see Crous et al. (2013) and Crous et al. (2019).