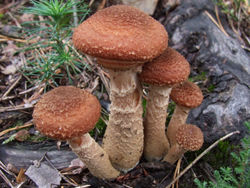 This fungus is found in temperate parts of North America, Europe and Asia. It causes a root rot on live forest trees, particular on pine, spruce, Douglas-fir and other conifers, leading to thinning crowns and often to tree mortality. The roots and stumps of cut trees remain sources of inoculum, and logging appears to promote the spread of the disease.

The mycelium of one individual fungus in the soil can extend over a large area with estimates ranging from 500 m in diameter to several square kilometres, including many above-ground fruiting bodies. The age of such giant fungi has be estimated at more than 2,000 years. The cap of a fruiting body typically has a diameter of 5-10 cm and a reddish-brown colouration.

The fungus apparently spreads to healthy trees mainly through root contact with diseased trees. The role of spores in the dispersal of the pathogen is still unclear.

Armillaria ostoyae has been declared a conserved name by the Nomenclature Committee for Fungi.