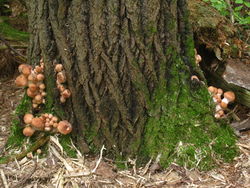 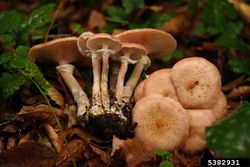 This wood-decaying fungus is widely distributed in the northern hemisphere and forms large mycelium networks (as anastamosing hyphae) in the soil. Using molecular techniques, a specimen in Michigan, U.S. (originally identified as "Armillaria bulbosa") has been estimated to cover an area of at least 15 hectares, to weigh more than 10,000kg and to have an age of (= remained genetically stable for) more than 1,500 years (Smith et al., 1992).

A. gallica is a saprophyte as well as a plant pathogen, attacking the roots of broad-leaved trees, mainly in oak dominated forests. Infections result in root rot and can lead to tree death, although the fungus is regarded as a weak pathogen, attacking mainly stressed and weakened trees. Infections spread to neighbouring trees via root contact or (less often) through spores. Fruiting bodies appear in autumn.