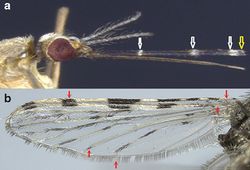 This mosquito is found in northern parts of Africa and the Near East, as well as in parts of western Asia and southern Europe. It is regarded as an important malaria vector in some countries. For example, it frequently carries malaria parasites in Egypt and can easily transmit the disease under laboratory conditions. An. multicolor is basically an oasis species and can breed in water with high salinity. However, it has been also reported from other habitats.