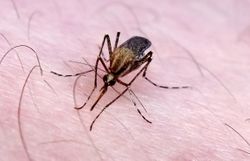 This mosquito is widely distributed in Europe, the Mediterranean region and western Asia, breeding in marshes and flooded grassland. It is tolerant to varying levels of salinity and is common in costal areas.

A. caspius bites humans aggressively and also feeds on domestic animals or other mammals, less often on birds. It can be a nuisance species and bites during the day or during the night and both indoors and outdoors. A. caspius has been implicated as a vector of several diseases, including the West Nile, Tahyna, and Sindbis viruses.